The powers that be have been seeking ideas to spread the game.

Here is just a thought from the EuroTag point of view.

Much like every fan of soccer loves to see the legends return at a lower level or in a charity match (see Dennis Bergkamp above), and mixed doubles at most pro Tennis events includes a plethora of stars in the autumn of their careers. Could Super League enjoy the same kind of intrigue and bring this type of entertainment to the fans?

The short answer of course is No, as Rugby League, at any level, is the most physically demanding sport in the world.

However we believe a game under EuroTag Rules could give Rugby League fans something else to cheer about.

Consider this concept “Super League Legends”, played as a regular curtain raiser under EuroTag rules, teams of 6-8, ex pros, club staff  and community club players. mixed in for a 13 – 20 min game, an idea that promotes the links with past players and community clubs as well as entertaining the early arriver, we feel could be a draw for Rugby League fans and in some cases more of a spectacle than the main game.

Why EuroTag and not something else? EuroTag is semi contact and designed specifically to create space to play off the cuff football, the small sided nature makes the concept more concise than masters (which past players seems largely reluctant to play and can come across a bit complex) and more authentic than Touch or Tag (which are rapidly becoming sports of their own) it would be most akin to the older style of heads up Rugby League that we all know and love. (Read ETRL coaching notes for more info) 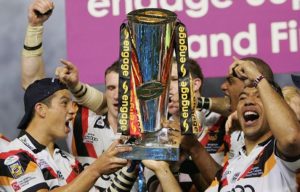 Just think of a Leeds Rhinos team, Including legends like Gary Schofield and Barrie Mac accompanied by players from the Leeds womens team, possibly two from the academy and a community club versus a Bradford Bulls team featuring a similarly matched outfit including maybe the Paul brothers and other players from the best days of the Super League era. No pressure, no scores to settle, just entertainment.